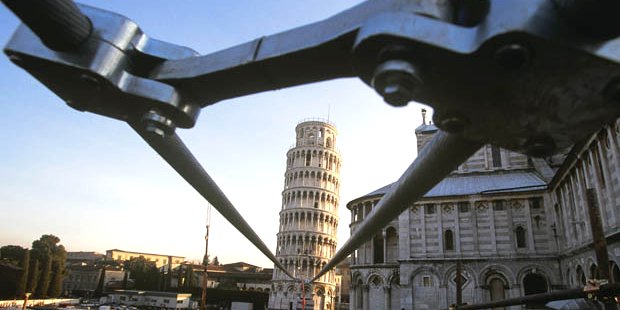 The Leaning Tower of Pisa was stabilized with a massive engineering operation that took place in the 90s, in the attempt to stop the monument from falling. In fact, by the end of the 80s, the Tower was slowly heading toward its catastrophic collapse.
The Monument has been closed to the public for the entire duration of the works (over a decade: 1990 - 2001).

Here is how they stabilized it... 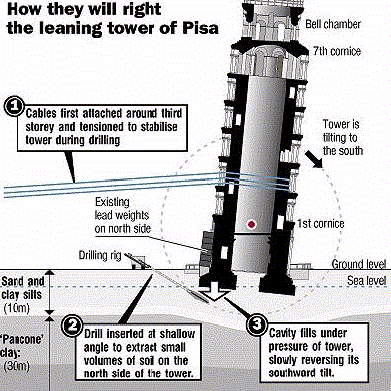 The Tower is leaning because the soil underneath the foundation is not strong enough to carry its weight (read more in this article where foundation details are discussed).

Can the Tower be fixed?

The monument began to lean in 1178 when the construction works were barely started. During the course of 800 years, the lean constantly increased, so much to become a cause of concern by the end of the previous century.

The solution to this problem was then to reinforce the soil under the foundation and to make room for the Tower to compress some of the soil and straighten back up towards the North (the Tower leans to South).

They did this in the frame of a project launched in 1990. The project total cost was over 30 million EUR and it lasted 10 years!

The project was led by John Burland, Emeritus Professor and Senior Research Investigator at the Department of Civil and Environmental Engineering of Imperial College London.
Burland led the commission of 13 experts that was appointed to fix the Tower. He started his career in 1967 with his thesis titled "Deformation of soft clay". Given his experience in consolidation works in this type of soil, he was the perfect man for the job.

The Tower tilted because the soil under the foundation wasn't strong enough to carry its weight.

How did they stop the Tower from falling?

The project went through the following phases:

These engineering solutions proved to be successful as the stabilization works recovered over 50cm of lean, bringing back the Tower around 4° inclination (like 200 years ago).

The works ended in 2001 and the Tower was proclaimed out of danger of falling. It was then reopened to the Public.

After that, no other stabilization work was performed. However, in the year 2013, engineers that are monitoring the Tower reported that the straightening motion hadn't stopped yet and the monument leaned back additional 2.5cm (from 2001 to 2013).

Stabilization works ended in 2001 and the Tower was proclaimed out of danger of falling.

Giuseppe Bentivoglio, engineer and Technical Director of the "Opera della Primaziale Pisana", the body supervising the monuments in the Square of Miracles, declared: "It was expected".

Bentivoglio explained that this spontaneous straightening is in fact due to the works carried out years ago and we should see the Tower leaning back to North for a few more years before it finally settles and eventually starts again falling towards the South.
Bentivoglio believes that future generations will have to carry out more works in order to keep the Tower safe from falling. The Tower is anyway safe for the next 200 years.
He continues saying: "In theory, it would be possible to straighten it completely, but nobody really wants that! ...the Tower was born leaning and leaning it shall remain".

The Mayor of Pisa, Marco Filippeschi, shares the same point of view and he declared: "The people of Pisa are delighted that the tower has been restored, but not that it has been straightened".

...the Tower was born leaning and leaning it shall remain.

The Tower drives to Pisa a few million visitors each year (they say 3 million of tickets sold yearly + 6 million souls visiting the Miracles' Square). They all come to admire this engineering wonder, to see with their own eyes that it does lean for real and it does seem to behave against the laws of Nature.
With so many tourists pouring in to see a leaning tower... why would the people of Pisa want it straightened up?

The Tower is safe for the next 200 years and this is all that matters to locals, visitors and to the UNESCO, which in 1987 enlisted the Square of Miracles in the World Heritage List.

WHO built the Leaning Tower of Pisa?

find out who designed the Tower and who worked on its construction.