WHO built the Leaning Tower of Pisa? 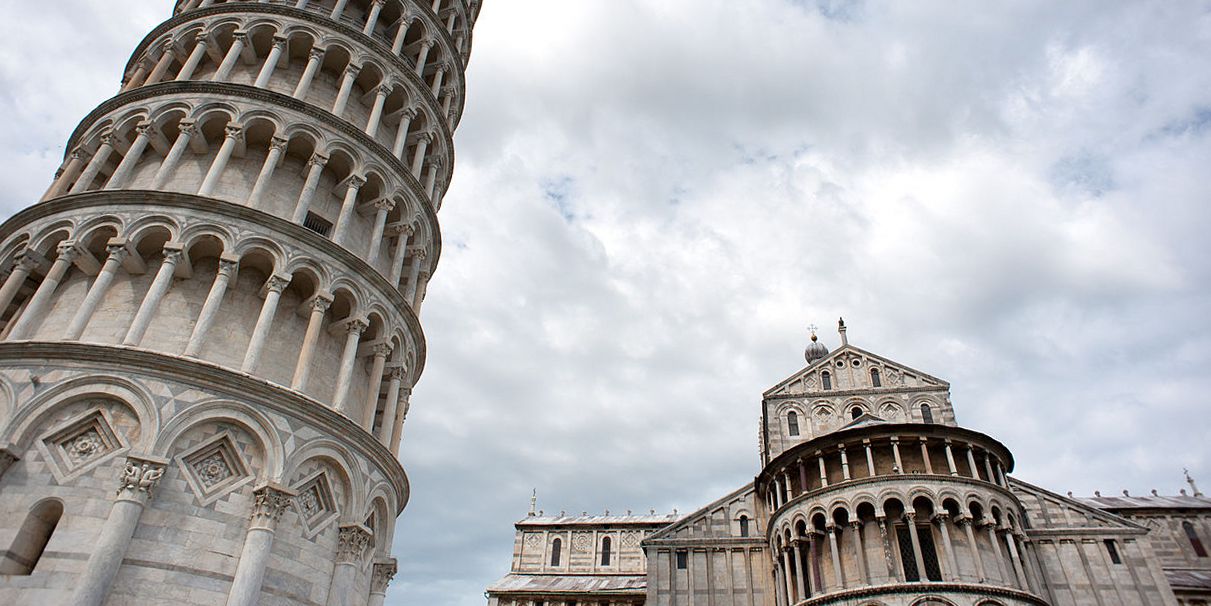 The construction of the Leaning Tower of Pisa began over 800 years ago and the whole process lasted about 200 years (1173-1372). Consequently, there were several persons involved in the construction of this fabulous monument (and a couple of legal entities).
As there are little records of the original construction documents of the Tower, the details of "who did what and when" are not entirely clear.
However, here is what we know...

First of all, the question "who built the Tower of Pisa" is a bit vague in its meaning.
The construction of any building involves at least one Architect, one or more Engineers, several workers and, last but not least, one or more Owners. Investors or patrons can also be added to this list.

Construction of Leaning Tower of Pisa began over 800 years ago. The process lasted 200 years!

So which one of them is the one that built the Tower?

...is it the Architect we shall give a prize to? ...or the Engineers that made it stand?
...or maybe the Owners that wanted it built in the first place?

We believe they all played their role in the construction of one of the most admired monuments on this planet... so let's give them the recognition they deserve and let's see talk about them, one by one.

The first name that comes up in the history of the Tower is Donna Berta di Bernardo, a local widow who donated sixty silver coins to the "Opera Campanilis petrarum Sancte Marie". That money financed the purchase or part of the stones used for the foundation of the Tower. It was the year 1172.
Besides financing the kick-off, the widow has a little part in the story on the Tower.

As the freestanding bell tower of the nearby Cathedral, the Leaning Tower was commissioned by the Catholic Church which financed and rightfully owned all the buildings in the Square of Miracles (the Cathedral, the Baptistery, the Monumental Cemetery, the other minor monuments and the Tower) at the time of construction.
The works in the Square started in 1064 with the construction of the Cathedral, under the guidance and wish of the Bishop Guido. He died in 1076, about one century before the beginning of construction works for the Tower.
It is not known who commissioned the Tower but it is fair to suppose that the freestanding structure nearby the Cathedral was already planned at the time when Bishop Guido was in charge.

The Opera Campanilis petrarum Sancte Marie, which received the donation from the di Bernardo widow, was most likely an organization funded to supervise the construction of the Tower. Today this organization bears the name of Opera della Primaziale Pisana and it is the legal body that owns and manages all the buildings in the "Piazza dei Miracoli".

Believe it or not, the identity of the initial Architect who designed the original project of the Tower of Pisa is unknown.
There are no original documents left for us to understand who designed this incredible monument and there is no "signature" on the building itself to shed light on this mystery.

There are three names that tend to stand out as possible mastermind for the monument:

We do not know which was the initial architectural design of the Tower but for sure it was supposed to be a perfectly straight freestanding tower bell.
Whoever the initial Architect was, he had to review the concept when, 5 years into construction, the Tower began to lean.
At that point works stopped for almost 100 years, therefore the Architect surely did not play a big role in completing the Tower and in making it stand.

Giovanni di Simone was the engineer in charge of resuming the construction of the Tower in 1272.
Although he received many critiques for not having straightened the Tower at the time, he successfully managed to bring the whole construction from 3 to 7 tiers.
At the time, given the tools and technologies available, this was a great success (keep in mind that nobody else has ever built a leaning tower without the use of steel).

In 1284 works were stopped again and they were resumed around 1350 by Tommaso Pisano.
The Tower was declared completed in 1372.

Giovanni di Simone and Tommaso Pisano had the skills, focus, bravery to complete an undertaking that many thought to be foolish.
They successfully finished the monument without making it topple and the quality of their work was so good that the Tower survived gravity with no assistance for over 600 years.

In recent times, the Tower went through three major interventions.
The last of the three was a rescue attempt to save it from collapsing. The 30 million EUR project, started in 1990, was completed successfully in 2001.
All its details are discussed in the article "HOW was the Leaning Tower of Pisa stabilized?".

if we had not stepped in, the Tower would have collapsed between 2030 and 2040

The previous two projects had the main goal of giving more value to the Tower.

The first to reopen the works was Alessandro Della Gherardesca, in 1838.
He was an established Architect and he thought that Pisa would have benefited from exposing the base of the Tower. The base at the time was mostly buried underground and much of the intricate artwork was not visible.
He gave the order to dig the base out of the ground and, as result of the digging, the Tower increased its inclination.
The works stopped right after the base was entirely cleaned up and set up as we know it today.

The second to join the "refurbishment party" was the Italian Dictator Benito Mussolini, in year 1934..
In his opinion, the Tower was an embarrassment for Italy and its unfortunate inclination had to be corrected to restore the intended vertical position (which is not even possible given the banana shape of the Tower).
He then ordered to straighten up the Leaning Tower of Pisa.
...and so people did... or at least they tried.
361 holes were drilled into the foundations and 90 cubic meters of concrete were poured into the holes.
The result was an overwhelming increase in the inclination of the monument.
Mussolini gave up trying to be an architect and brought Italy to war a few years later.

Italians learned from these experiences and they increased the bureaucratic complexity of managing monuments (and probably the whole Country).
Today it takes more than one single person to order any work on the Tower. In fact, the works started in 1990 were managed by a commission of 13 persons.
The commission was hired by the Opera and subject to the approval of the Italian Government and of the Church.

The Tower still stands and we can appreciate its beauty. No matter who the Architect was.

In the end, it does not really matter who the initial Architect was. What matters is that many great people gave their genius and time for this incredible building and, thanks to them, the Tower still stands and we can appreciate its beauty.
It is empowering (and good to know) that brilliant minds from all over the World can today join forces for a good common cause and be of help when the World needs them.

WHO fixed the Leaning Tower of Pisa?

everything about the people who straightened the Tower.