The Leaning Tower of Pisa is perhaps the most famous leaning building in the World.
However, its audacious statement against gravity is something that was not planned in its initial design.
To understand why the Tower started to lean, we must have a look at the geographical location of the small Town of Pisa...

Located between the rivers Arno and Serchio, the small town of Pisa sits entirely on alluvial soil composed mainly of sand, clay and shells. The particular composition of this soil makes it very soft and not suitable to stand heavy loads.
So, the reason why today we can admire this outstanding construction is the unstable soil over which it was built.

The Tower of Pisa leans because it was built on alluvial soil.. engineering fail or masterpiece?

The Tower started to lean about five years into its construction when the builders finished the third tier (about 23m high).
As the original design planned a total of eight tiers, it became immediately evident that the construction had to be stopped until a solution to the problem of sinking foundation was found.

In the meantime, at least two other towers were built in Pisa which followed the same faith:

Both towers started to lean after construction. However, unlike the Tower of Pisa, the works on these two other towers continued uninterrupted resulting in straight towers, built exactly according their original design. It is unknown whether this is due to the fact that those towers are shorter (therefore less at risk of collapsing) or it is just because the towers began sinking after their completion.

What makes the Tower of Pisa unique, is the engineering effort that was made to continue the construction despite the unfavorable conditions of the foundation.
To overcome the heavy tilt of the first three stories, engineers had to review the design and alter the geometry of the tower to compensate for the unplanned inclination.
The result is the unique banana shape of the Tower that is clearly visible when entering from the west door of the square.

Did you know that the Leaning Tower of Pisa has a #banana shape? 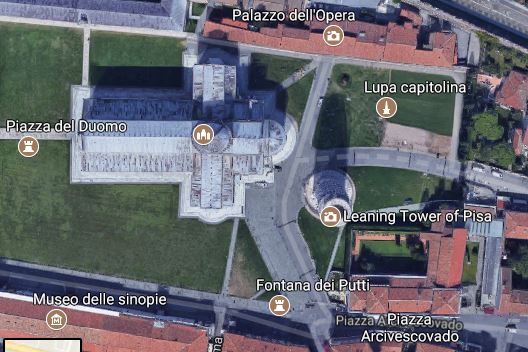 A curious and little-known fact contributed to the long-term standing of the tower of Pisa.

Every day the sun shines on the tower on its south side, from the east in the mornings to the west in the evenings. In Italy, the irradiation from the sun is pretty powerful and it causes a temperature increase of the surfaces exposed to the direct sunlight. This is especially true in summer where the air temperature can surpass the 40°C.
In this condition, the thermal expansion of the south side of the tower causes its length (height) to increase. The north side (which is never directly irradiated) is not subject to the same change of size.

Examing an aerial photo taking from the top (source Google Maps), one can see that the tower leans in direction SSW (south, south-east).
This means that when the sun shines hot over the Tower, the building bends back towards the north side, decreasing the overall tilt angle.

If the tower was leaning in a north-ish direction, this phenomenon would have increased its tilt, probably ending up in a catastrophic collapse.
The fact that the tower leans in a south-ish direction has then been fundamental for it to stand until today.

Another fact that contributed to saving the Tower from a premature collapse is the war that broke out between Pisa and Genoa (a nearby city-state), halting construction for nearly a century. This delay allowed the foundation to settle enough to bear the weight of the entire tower.

It was a #war to save the Leaning Tower of Pisa from collapsing!

When construction resumed, chief engineer Giovanni di Simone successfully managed to get the Tower to stand.
The leaning angle of the newly completed tower was about 1.4°. It is estimated that the Tower continued to subside at the rate of 0.05 inches per year, until 1993 when it reached the 5.5° of tilt. At that point, the Tower was considered in danger of collapse and it was closed to the public.

When the Tower reopened its doors to the public in the year 2001, the tilt angle was successfully reduced to less than 4.0° (read more here).

According to the experts, the current conditions of the soil are good enough to guarantee that the Tower will stand for at least 200 more years... unless an earthquake hits Tuscany, like the ones that brought destruction in Abruzzo and other central parts of Italy.

HOW was the Leaning Tower or Pisa stabilized?

learn how the fixed it and how much money they invested to do that.