In 2019 the Leaning Tower of Pisa is going to be 846 years old.
...this if you count its age starting from the beginning of construction in 1173.
If you were to count from the year the construction was completed, the tower would then be much younger.

It took 200 years to complete the Tower, from the commencement of the excavation works (1172) to the time the bells were installed on its top (1372).
The first stone of the Tower was set on 9th Agust 1173, courtesy of Donna Berta di Bertoldo who donated 60 silver coins to purchase the foundation stones (the complete story of the construction of the Tower is covered on the page "WHO built the Leaning Tower of Pisa"). 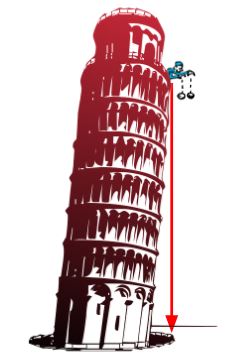 In its 845 years, the Tower has witnessed many historical events, including wars, famine and civil revolutions.
On the bright side, the monument has been an inspiration for great minds such as Leonardo da Vinci (1452-1519), Michelangelo (1475-1564), Galileo Galilei (1564-1642).
Galileo Galilei used the Tower to perform his famous experiments to determine the effect of the force of gravity.

Despite the tilt, the Tower has never been in real danger of falling... at least until the end of the previous century when it was closed for stabilization works.
In 1990 the angle of tilt became dangerously close to its critical limit.

A commission of 13 experts worked on the 10-years-long stabilization project that, with a budget of 30 Million EUR, brought the Tower back to safety, leaning at an angle of 3.9°.

The Tower is going to be safe for the next 200 years and it will then live well past its 1000th birthday.